Made by Jacob Thomas Davidson, Hardik Patel and Aditi Chalisgaonkar

Iot
Its an ambient flower that behaves like a pet as well. It displays an enhanced emotion of excitement with the owner closer to the flower and when the owner is away from home, shows dullness. There is even a possibility of interaction between the flower and owner through SMS using IFTTT facility.

Its a wonderful example of ubiquitous computing where the ambient device dissolves in the surrounding, merging in with the entities around. Its a kind of enchanted object like David Ross mentions, where a simple object like a flower pot is transformed into a magical interacting device.

Its 2025, Smart devices have developed into vast territories and enveloped our lives that devices meant to free our time, create more social relationships have actually alienated each of us from each other. We are in our own world of interests and online networking. No one talks to each other anymore or is interested in interaction with other fellow human beings around.

Aditi is one of those , immersed in pursuit of virtual life. She lives alone, has no friends and follows the same routine everyday. Goes to work during day and stays at home during night involved in so called "social interaction" with other virtual characters online.

Her only companion is the ambient flower, "beatz". beatz is loyal only to aditi and always becomes excited when aditi is around, showing its excitement through the heart beat displayed.

Having been given a brief and some inspiration, the start of the process was to decide what to make. Hardik suggested that we make a pet, or something that would welcome a person back home. From that, we moved onto which emotion we might represent. Jacob suggested we use the Atlas of Emotions website (http://atlasofemotions.org/#states:enjoyment), and so we honed in on excitement. We brainstormed the emotion and decided that it was associated with energy, a raised heartbeat, and movement. Aditi had been aware of ferrofluids and had been wanting to play with it for a while. She suggested that it be used to show excitement and energy, and the team had made a decision.

Once we had decided what we wanted to do, we knew that we would have to go step by step to be able to complete it.

We ordered ferro fluid and an electromagnet off Amazon on Thursday (the day we were given our brief), so as to be able to work with them as early as possible. The thought was to keep the project simple - just control an electromagnet - and hope that the ferro fluid would be the wow element.

We wanted to get to work in any case, and decided to try running a DC motor, as we would be replacing the DC motor with an electromagnet once it arrived, and using the same set up and code.

We found a circuit diagram for this, but it used the TIP120 transistor, whereas we had the S9013. We mapped out the new circuit, and connected it.

We could hear the motor working, but the shaft was not moving. We assumed that there was not enough power being supplied, but that an electromagnet would work anyway. As we waited for our electromagnet to arrive, we played around with iron filings and neodymium

We also tried to brainstorm some forms that our finished product could take:

In some time, the electromagnet arrived, and we attached it to the same circuit. It did work, but wasn't nearly strong enough.We could now either make a stronger electromagnet, order one,  or use permanent magnets by moving them around. We made a weighted matrix (yes, really), and found that our best bet was to order a stronger one, which we did immediately.

The next day, the ferrofluid arrived, and it was immense fun to finally get our hands on it and play!

The neodymium magnets produced beautiful effects, but unfortunately, our suspicions about the weaker electromagnet were confirmed. It had a negligible effect on the fluid.

The next day, the stronger electromagnet arrived, and we tried to connect it into the same circuit (which had worked so far) but the electromagnet didn't respond to being put on and off using the particle. It was just constantly on.

We were quite downhearted, and decided to make something with a permanent magnet attached to a servomotor as a back up.

The next day, we spoke to Daragh, and he suggested that we change our transistor to a TIP120, as the S9013 might not have been able to handle the 12V that the stringer electromagnet needed. This did solve our problem, in that our electromagnet could now be controlled, but it was still too weak to have the aesthetic effect we desired.

On a whim, we put the permanent magnets on one side of the electromagnet, and this worked wonders, strengthening the field while still allowing us to control it.

We were ecstatic, and our hearts beat a little faster

<video of beating heart, the one from Insta>

The next step was integration with the IR sensor, since the concept that we had fixed on was to have the ferrofluid beat faster in excitement when we came closer to it. This was done very quickly. In parallel, we were also working on the presentation, and had decided to give the creature the form of a flower.

As we were building out the flower pot, we realised that our device wasn't really connecting to the internet. We decided to add to our scenario, and have our flower respond to messages from it's human.

We then added the necessary ifttt applets and particle functions to accommodate this, and placed everything into the flower pot, having first made sure that there were no loose connections or exposed wires.

We tested it, it worked, and our little pet was ready!

On the outer side, our product depicts a pet plant with a beating heart. It's heartbeat goes a but up when it knows that I have left office and heading home. It accelerates even further when we reach home and approach it.

On the back end on this display of emotions, there is a seamless system at work. We have the power source for electromagnets, the IR sensor and the breadboard with the Particle Photon and other components enclosed into it. The stem of the plant encloses a series of permanent magnets in series for magnifying the effect of the electromagnet. On top of it is the electromagnet. The petri dish containing the ferro fluid (which depicts the beating of the heart) is placed on top of the electromagnet. So, this efficient placement of objects in the form of a flower pot brings out the joy of someone coming back home.

When we initially started thinking about ambient devices, few things which immediately came to our mind were playing with lights and motors, the way we had seen in example projects. But then when we started digging deeper, we started exploring more emotional side of things rather than visual and auditory things which machines are doing a lot nowadays. More brainstorming led us to design a pet at home and shows it's heartbeat in some way and how it changes when we are near and far away. This project also gave us to explore different visual ways of representing stuff like using ferrofluid to show heart beats. Looking at the bigger picture, we feel that the essence of this project was about creating really meaningful ambient objects by using a really simple code and few electronic components to show that when simple things are put together in a context, it leads to a beautiful story. 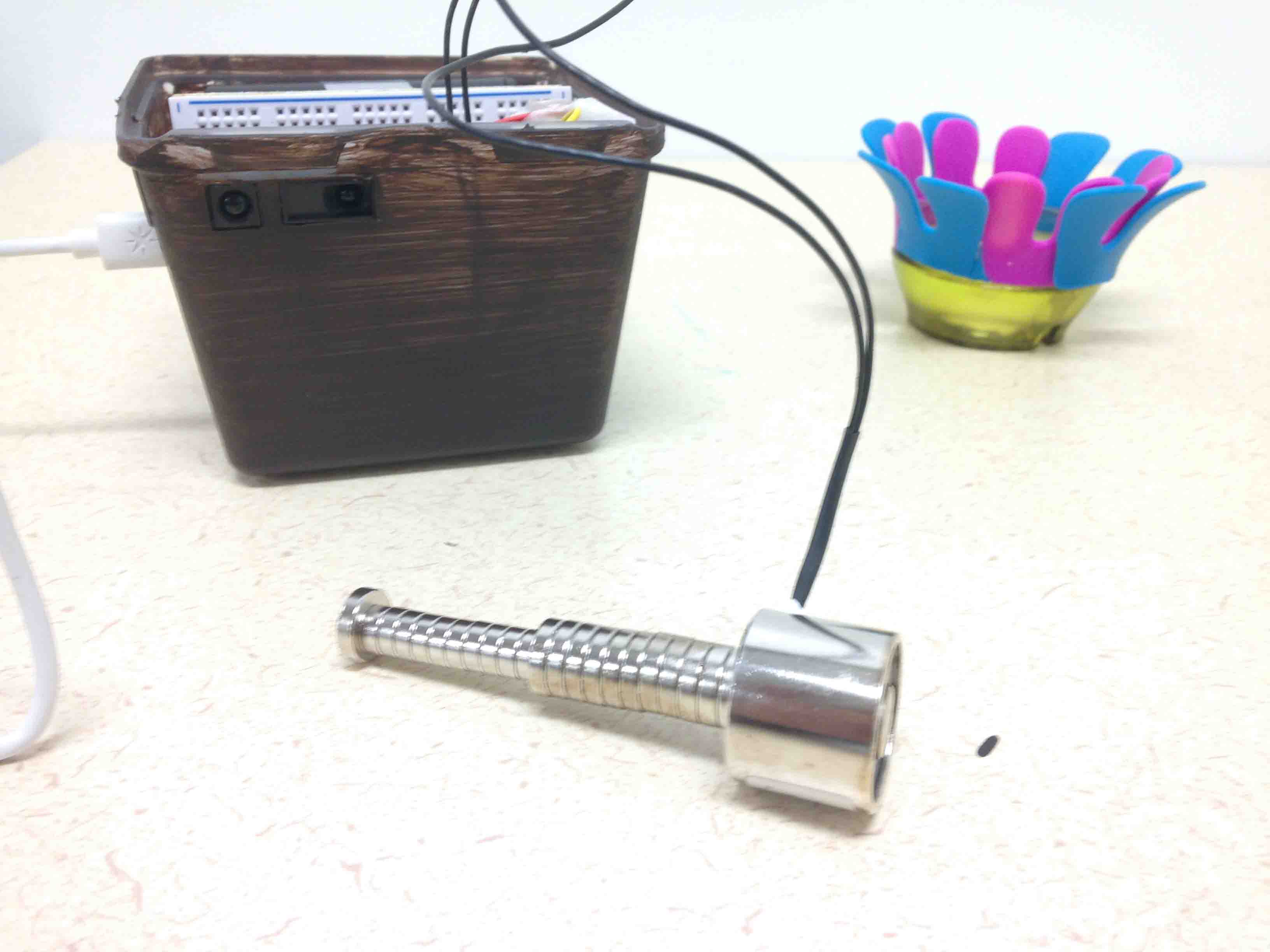 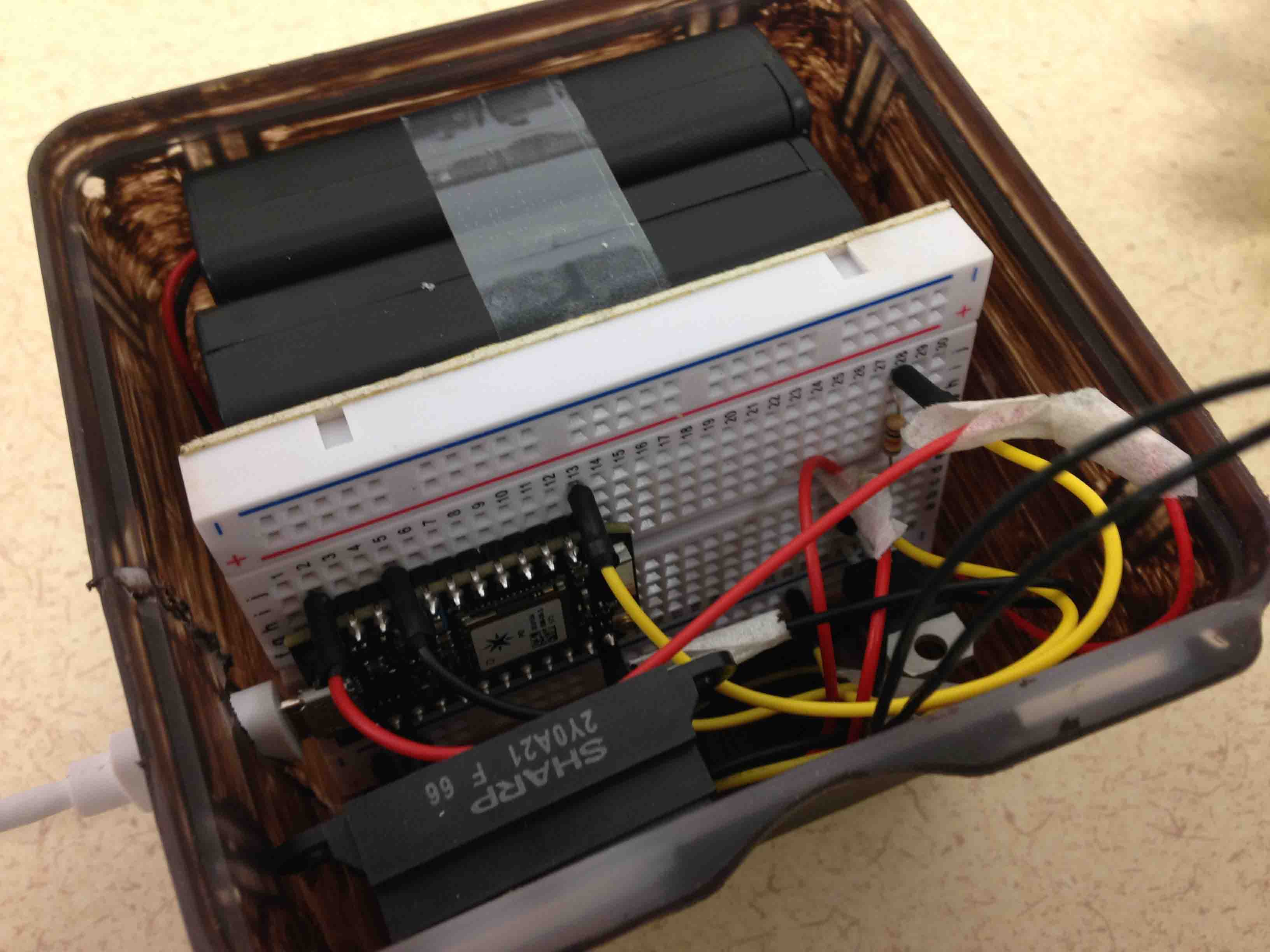 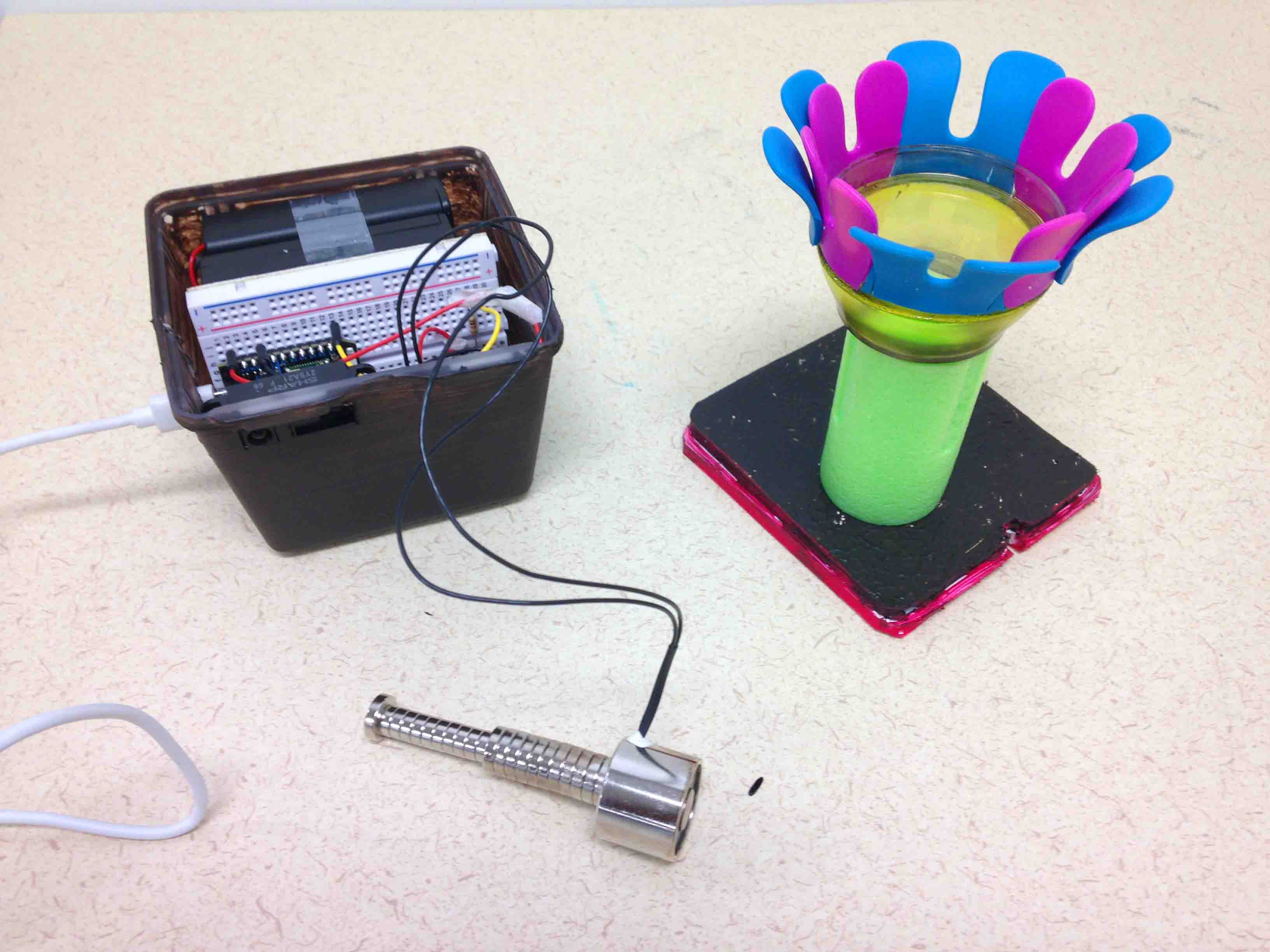 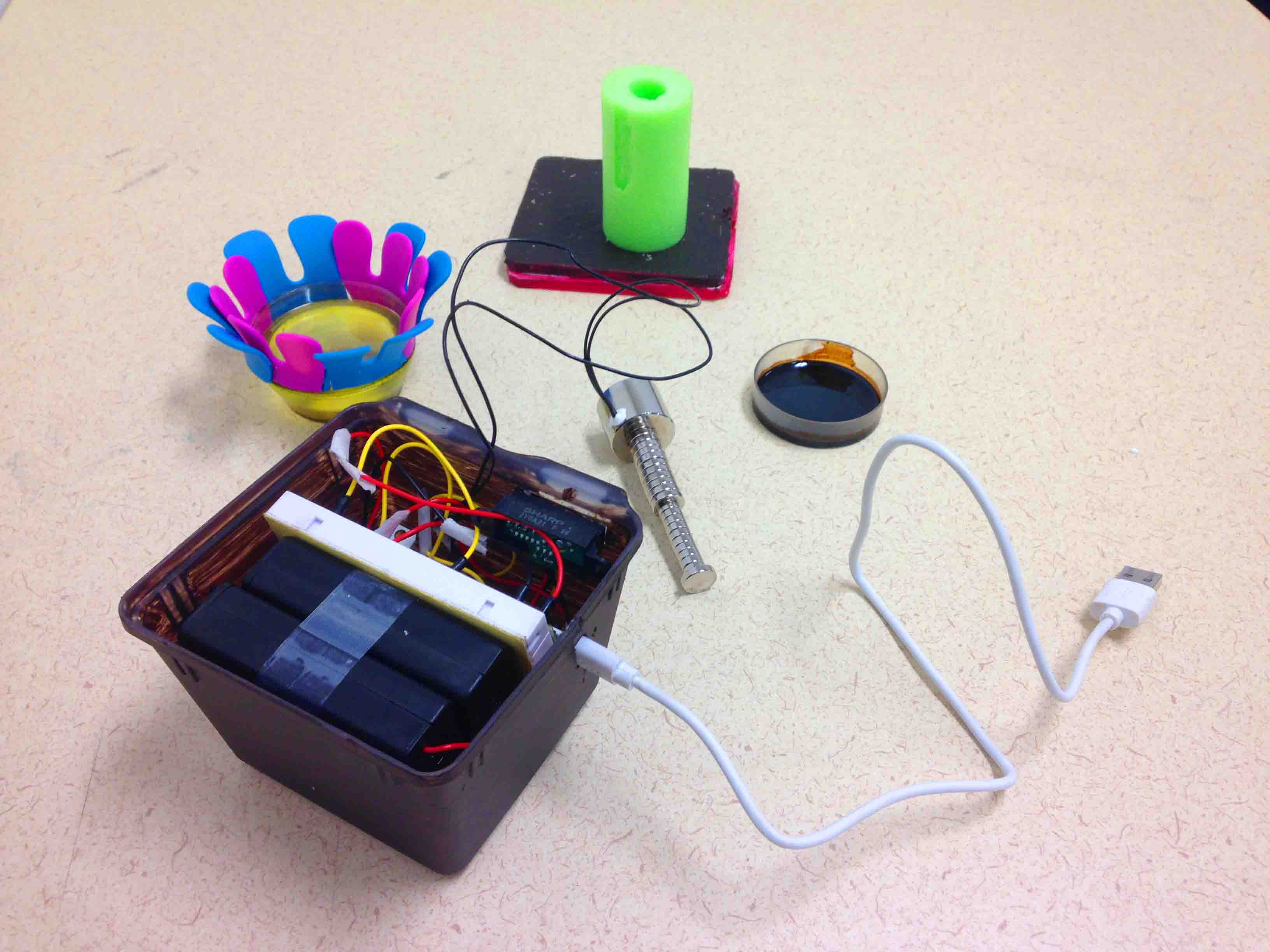 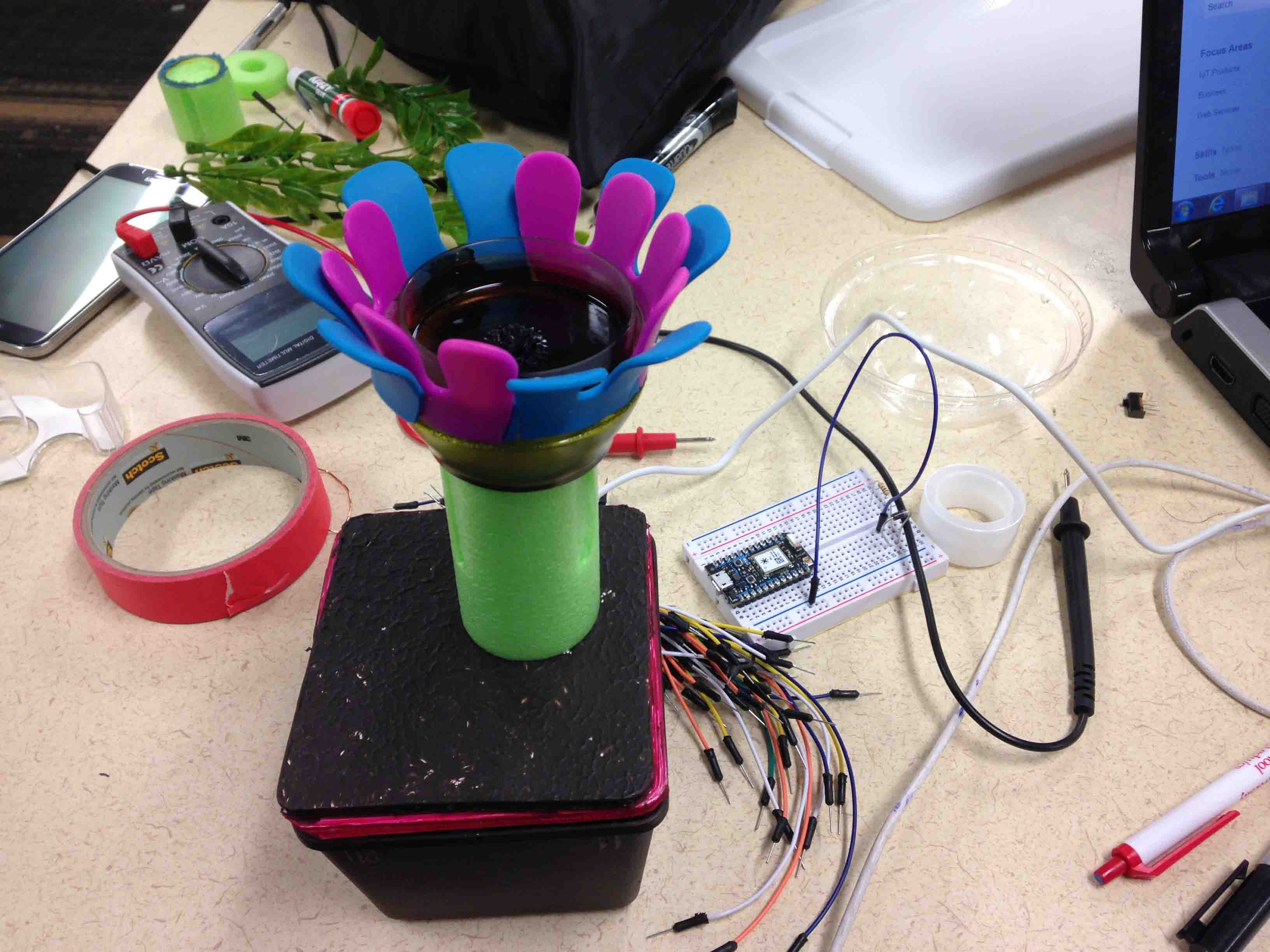 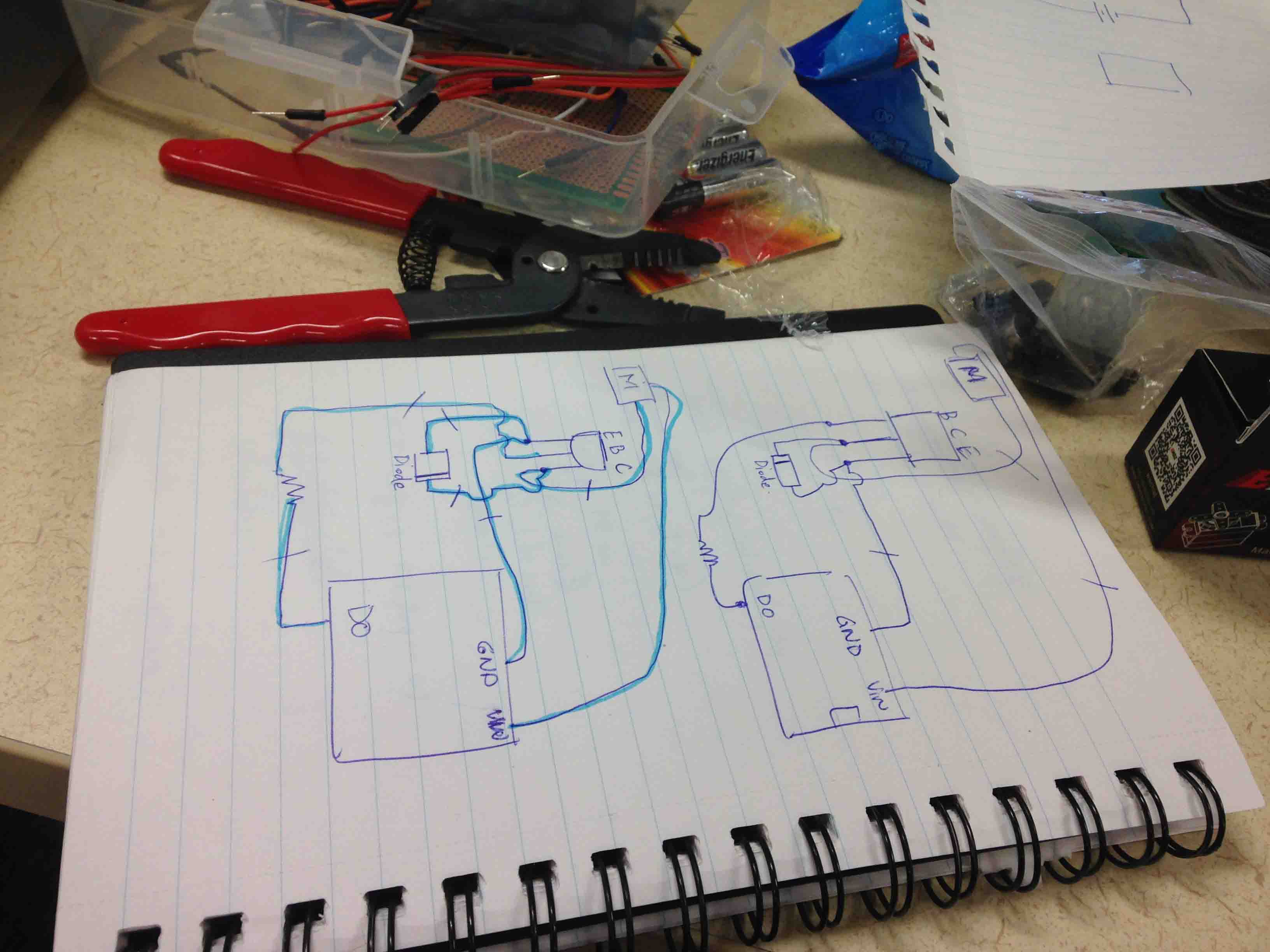 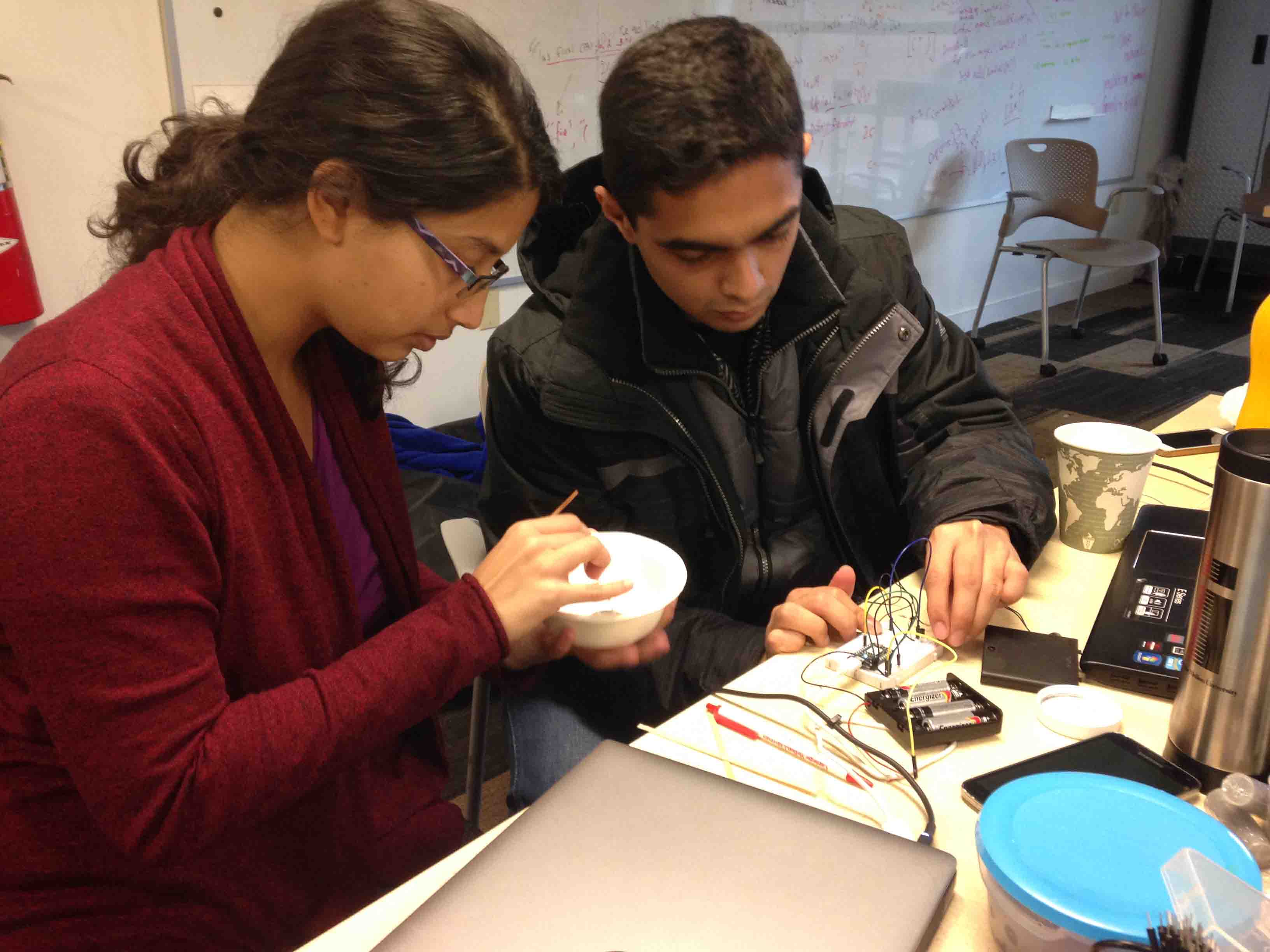