Made by VANESSA MANZ, Sisi Yu and kasandrp

Create a feeling of togetherness for a couple who is living apart through the experience of watching a scary movie together using the power of connected social devices.

Because a growing number of friends and couples spend time living far apart, we intend to change the experience of having to watch a movie alone to a shared experience for pairs who enjoy horror movies so they can feel closer together. We did this by developing a social device that allows one member of the couple to signal to the other when they are ready to watch a movie and when they feel scared. 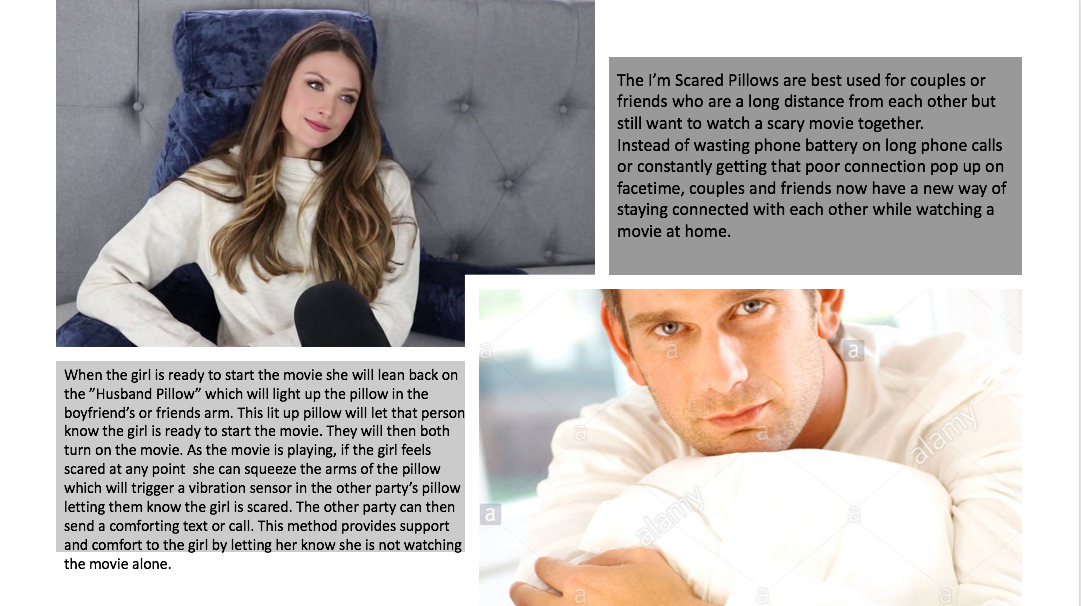 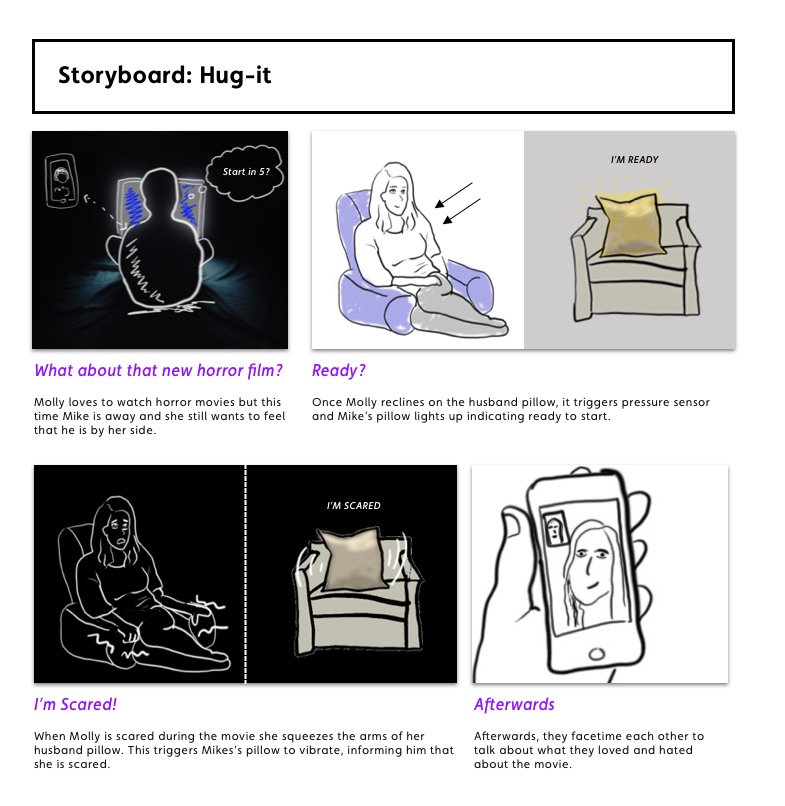 To begin the project, each member created three different ideas and storyboarded the possible interactions. We shared these ideas online and discussed them- we riffed on a number of them but it was clear that we all wanted to create something for couples or friends that live apart since we all had experience with that situation. Our inspiration became the GoodNight Lamp, which enables couples to let each other know when they are awake and asleep.

It was a quick jump from identifying our target audience to our value opportunity- improving connectedness while watching a scary movie. Watching movies simultaneously is a growing trend. But couples and friends do not have many choices that help them feel a connection beyond pressing play and texting or FaceTime-ing as the movie progresses.

In order to create a new level of connectedness for our target our device requirements were:

Must: Fit in with the existing environment, not require wearing, be opt-in, enable 1-way sharing via cloud particle function, be safe

Should: Use touch as input and output, augment existing plans so that both parties would consent to use the device

In storyboarding the experience, we focused on using pillows for the interaction, since most people have pillows in their home. Initially, we planned to use two throw pillows, however, after discussing the user experience and wanting it to be as natural as possible, we decided to use a husband pillow for the "sender" end of the experience. This would enable the user to hold the "arms" of the pillow when they felt scared during the movie, similar to how they would hold their partner's arm or hand. This would send a message to the "receiver" end of the experience in the form of a short vibration.

We were also concerned with unintended consequences. We decided that it is very important that this not create anxiety for either member of the couple, so the device would augment existing plans that the pair would make to watch a movie. This would also take care of the need for consent. Otherwise, the pillows would serve their normal purpose and not require explanation or use.

The first prototype was a working prototype that consisted of three breadboards. The first breadboard had three sensors: two FSRs and one flex/bend that would serve as the publishing events. We established that it worked, by having it publish events to the Particle cloud and monitoring it on the console and via the Particle Serial Monitor. We established the range of values to trigger the events by tracking the values in the serial monitor when the events were triggered.

The second breadboard had the LED light and the third one had the solenoid, both outputs. Once we established each board was working using a push-button, we set up each device to subscribe to the published events.

After we successfully tested the working prototype and received feedback on it, we begin to build the functional prototype. This included purchasing two pillows: a husband pillow and a throw pillow. We made some changes based on the feedback: we switched from a solenoid to a vibrating disc as it was more appropriate for sewing into a pillow, constructed a trigger pressure switch for the back of the pillow, and switched to bend sensors for each side of the "arms."

We also consolidated into two breadboards- one for each pillow. We lengthened the leads to enable us to embed the sensors and the outputs in the pillows. We did this methodically, testing each lead as we added it and adding each output incrementally. Once all of the parts were working, we embedded them into the pillows and brought our device to life.

For the trigger pressure switch:

For Vibration and LED on Receiver Pillow:

Create a feeling of togetherness for a couple who is living apart through the experience of watching a scary movie together using the power of connected social devices.