Made by Benjamin Fisher

A laundry bin that makes noise and lights up when full! No more forgetting to bring it to the laundry room. Can even monitor remotely!

0
Problem Statement:
This project is designed for my mother, who usually does the laundry, and for my father (and myself, when I am home), because we often put clothing in the bin and occasionally must be reminded to bring the bin to the laundry room when full.  This will be useful for helping my mother plan a daily schedule knowing that a load or two of laundry will have to be done as well.  She will not have to be present to make sure that the basket doesn't become overloaded, since the buzzer will alert my father as soon as the bin is sufficiently full, and an event will be published to the cloud informing her that the switch has been activated. The sensor will be checked over time to prevent individual clothes from activating the event.

I am trying to create a simple sensing device that reminds someone who is used to throwing laundry in the bin and walking away that it is time to take the bin to the laundry room.  For added convenience, in case the buzzer eventually dies, an event is published to the cloud so that a user can stay informed as to the level of laundry in the bin.  The goal is to provide simple audio/visual feedback for non-tech-savvy users to prevent a recurring headache.

Process:
I started by making an LED blink when a proximity sensor was triggered.  The general wiring and setup came from  https://learn.sparkfun.com/tutorials/qrd1114-optical-detector-hookup-guide, modified for my needs.  Next, I added a delay to check if clothes were falling or if the bin was full enough that the sensor was constantly reading low values.  This is similar to "Hot Shot Hoops" by "Team IOT Basketball" (Carlos Roca and Michael Gurdak, originally published at https://www.hackster.io/iot-basketball/hot-shot-hoops-539e3e), although they used a PIR sensor.

Then, I added a buzzer (see http://www.instructables.com/id/How-to-use-a-Buzzer-Arduino-Tutorial/) and published an event when the sensor registered as having been below a threshold for a given time, inspired by code provided by Daragh Byrne in the intro workshop for his Carnegie Mellon class Designing for the Internet of Things.  Finally, I added a reset button for the user to press to silence the alarm, as the alarm was only intended to serve as a quick reminder.  For a progression of the circuity, see the pictures at the bottom of this page; earlier milestones of code are below in the documentation on this page.

Outcome:
The final code, diagram, and bill of parts are below in this "Documentation" section.  For the video of the completed project, see the featured video.  Eventually, I would fine-tune the analog inputs to thresholds that work with various types of clothing as they pile up in the bin but may not necessarily be within a fraction of an inch from the sensor.  A longer-range sensor would be necessary, or even multiple sensors to ensure accuracy.  I would also need to make the hardware for mounting the components on a plastic bin or an adhesive for soft mesh laundry bags, with the entire thing working wirelessly.

I learned that despite the intimidating challenge of "hacking one's home" using the Internet of Things, it is not very difficult to do. A big challenge is in thinking of applications that are useful, usable, and desirable. In retrospect, I would have liked to get a bigger proximity sensor and mount it elsewhere (similar to the button), as well as choosing much smaller wires, since they can obscure the sensor. The large wiring simply gets in the way of the sensor. I thought about using light instead of proximity but because some clothing has reflective elements, I'd need it pointed at a light source on the opposite side of the bin to measure when that value was broken, which is battery-intensive. Since my parents are not exceptionally tech-savvy, it would probably be more familiar to them to have a text sent to their phone or an email to their computer instead of monitoring events in the cloud. 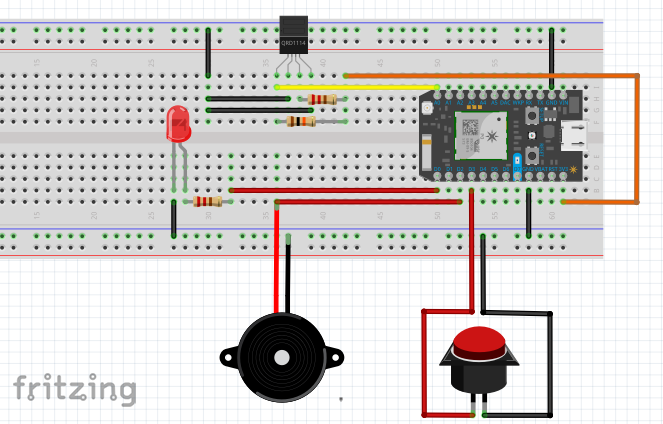 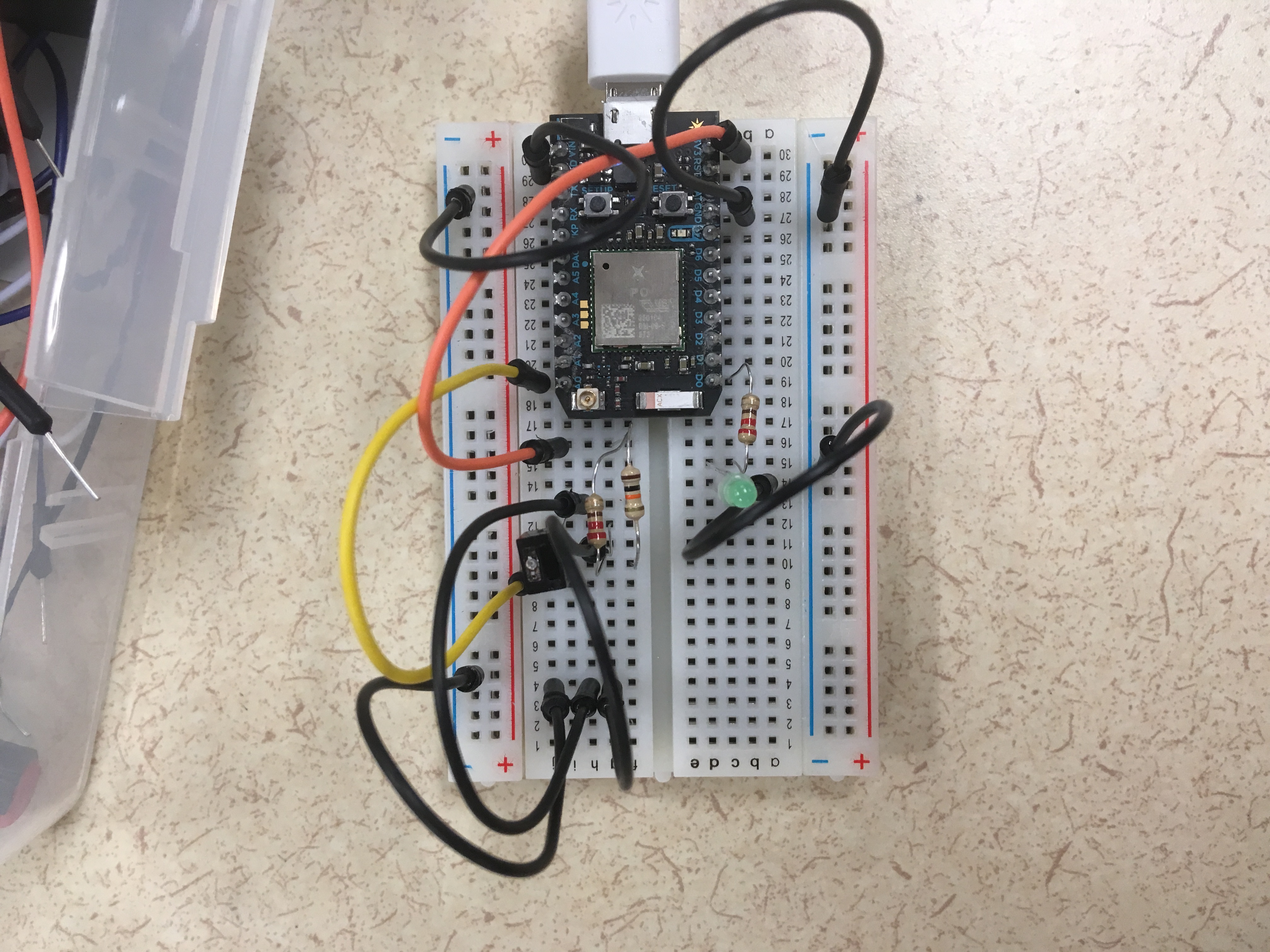 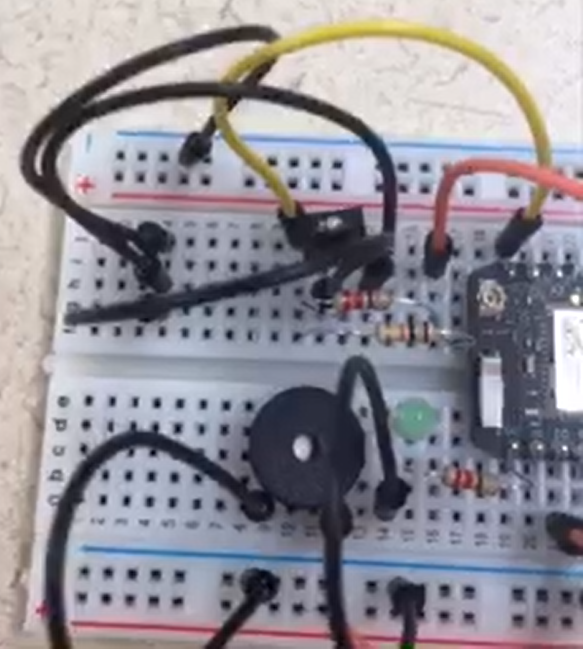 0
Reset button included, to be mounted on bin 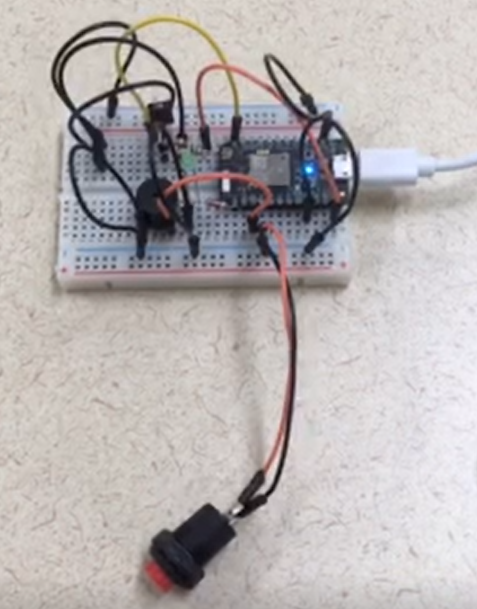 A laundry bin that makes noise and lights up when full! No more forgetting to bring it to the laundry room. Can even monitor remotely!